After a year of “home invasions” in the form of virtual screenings and online events, this October sees Grimmfest returning to the cinema at last. From 7th to 10th October, the festival will be back at its regular venue, Odeon Great Northern, Manchester, with four whole days of movie premieres, Q&As and exclusive events.

But that’s not all. In response to the continued uncertainty surrounding the pandemic, and by popular demand, this year’s festival will be a hybrid. The live event will be followed by an online version, running from 14th to17th October.

The line up of feature films has already been released, but until now the closing feature remained shrouded in mystery. 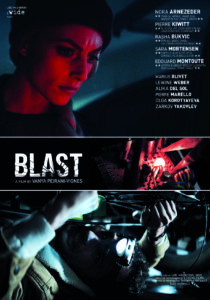 Grimmfest is thrilled to be hosting the WORLD PREMIERE of BLAST [DÉFLAGRATIONS] and will be joined by members of the cast and crew for this premiere screening.

The festival will reach a suitably explosive climax with Vanya Peirani-Vignes’ heartstopping high-tension, high-concept thriller, which stars Nora Arnezeder (MANIAC, ARMY OF THE DEAD, MOZART IN THE JUNGLE, etc) as a bomb disposal expert who finds herself trapped in a car wired to an anti-tank mine, and must rely on her own skills and those of her colleagues to survive. Combining the escalating claustrophobia of its setting with a breakneck race-against-the-clock, an emotive human drama about family, friendship, commitment and compromise, and even finding time for some sharp socio political jabs along the way,  it’s a fast-paced and ferocious feature film debut for writer-director Peirani-Vignes, and shot by the great Thierry Arboghast (Luc Besson’s regular cinematographer), which hits the ground running and never lets up for a moment.

We can also announce our three key sponsors for Grimmfest 2021. UK genre and cult film distributor ARROW VIDEO is supporting our live festival, HORROR CHANNEL is supporting our virtual online event and our Lifetime achievement award (This year awarded to actress Dee Wallace), while UK based movie memorabilia company RENDEZVOUS CINEMA are sponsoring our annual ‘Reaper’ awards, of which a carefully selected jury will deliberate and vote on ten awards that range from BEST FEATURE to BEST SCARE.

The Grimmfest Team are also delighted to announce the short film lineup for 2021. This year we will be screening more short films than ever before, with a total of four Short Film Programmes at the live festival. In total we will present two world premieres, four international premieres, five euro premieres and twelve UK premieres, and many more that are new to the north of the UK:

PROGRAMME ONE, entitled WEIRD… Toxic male entitlement comes a cropper in Ryan Kruger’s provocatively on-point #MEOWTOO. Love in a time of pandemic holds more than one risk in Gil Vesely’s cheekily topical WHILE WE STAYED HOME. A postmortem photographer gets a lesson in life in Paul O’Flanagan’s Dickensian morality tale MEMENTO MORI. There’s paranoia and puppetry amid the porcelain in Josh Funk’s sublimely surreal THE FUZZIES, and an unsettling discovery for a happy young housewife in Craig Low’s darkly comic and disturbing MOVIN DAY. A rescue dog his haunted by spectres of guilt in Joe Cappa’s hallucinogenic GHOST DOGS. A young girl suspects that her grandmother’s stroke has extraterrestrial origins in Sid Zanforlin’s blackly comic and unexpectedly life-affirming THEY’RE HERE. Chris McInroy takes a stomach-churning swipe at the absurdities of office politics in the outrageous GUTS. A has been horror star hatches a plan for his revival in Max Ward’s tense and mischievously metacinematic RETURN OF THE BEAST FROM OUTER SPACE. And meeting the girlfriend’s parents proves no laughing matter, in Javier Chavanel’s nightmarish SMILES.

PROGRAMME TWO entitled UNCOMFORTABLE… Every parent’s worst nightmare comes true in Damien Fannon’s horrifying CRY BABY. An E.C. Comics-style morality tale gets a sharp social media spin in Nathan Crooker’s gleefully grotesque #NOFILTER. Honeymoon happiness gets shockingly derailed in Craig Ouellette’s tense and emotionally brutal ANNIVERSARY. A young model gets out of her depth in Enrico Po’s tense and troubling OUT OF BODY. A self-harmer is haunted by a past betrayal and her own compulsions in Dan Repp and Lindsay Young’s chilling CUTTER. A young man’s increasing sense of uncertainty in his new relationship fuses with his arachnophobia, in Brodi-jo Scalise’s creepy and Kafkaesque ITSY BITSY SPIDER. And an estranged son’s resentment over his father takes on physical form in Dane Hallett’s visceral and emotive fusion of family drama and body horror, RANCOUR.

PROGRAMME THREE, entitled DEADLIER… Alienation and amnesia in the desert in Natasha Halevi’s solo Super-8 shocker DON’T GO OUTSIDE. A trailcam captures something unexpected in Alisa Stern’s mischievous take on found footage filmmaking, POSTED NO HUNTING. Romance proves risky in Chloe Wicks’ deadly droll AFTERTASTE. Commitment-phobia confronts a cornucopia of toxic masculinity in  Shahrzad Davani’s disturbing and disorientating ALL OF YOU. Peer pressure power games prove murderous in Jamy Steele’s unsettling and slippery SALMON PINK. A social media influencer discovers the risks of over-sharing in I-Hui Lee’s chilling HONEYMOON. And an emotionally-fragile young woman gets increasingly out of her depth at a drunken party, in Ana Muñoz’s harrowing and horrific HANNYA.

PROGRAMME FOUR, entitled DYSTOPIA… The view from a window reveals a shocking crime in Carlo Ballauri’s dystopian nightmare, THE RECYCLING MAN. Appearances prove deceiving in Iván Sáinz-Pardo’s wistful and haunting FACES. Traumatic memories assume physical form in Katherine Chediak Putnam’s eerie and enigmatic INFERNO. Love conquers all – with the aid of technology – in Lovina Yavari and Lance Fernandes’ unexepectedly heartwarming RED STRING OF FATE. A mother and daughter break free from male oppression in Jessica Grace Smith’s post-apocalyptic parable, FLIP. Escape is achieved at a chilling cost in Eric Jungmann’s startling BODY OF THE MIND. The toxic influence of tabloid TV is savagely satirised in  Jaime A. Calachi’s Kafkaesque HABITAT. Arif Khan offers a hellish allegory for the sacrifices made by refugees and asylum seekers in the chilling THE PURPLE IRIS. And Alex Proyas makes a welcome return to the world of DARK CITY in the cyber-noir fairytale, MASK OF THE EVIL APPARITION.