That Gets Under Your Skin 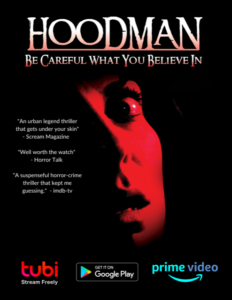 The landscape of cinematic horror has been wide and varied over the decades. In the 1960’s, psychological terror was a refreshing and bold approach to what had once been the province of creature and monster films of the fifties, catapulting us into a brave new world of unconscious fear. Hitchcock and later, DePalma, tapped the dark undercurrents of the European cinema and merged them with a new American sensibility.

The 1980’s ushered in a truly terrifying era where new villains emerged from the suburban night-scape, all too often wearing hockey masks and wielding chain saws. It seems ever since we’ve been in a race to rack up higher body counts and more gallons of spilled blood. Have we lost the ability to scare by using the power of the subconscious to cultivate new brands of terror?

Hoodman is a film that is not afraid to return to the kind of slow-burn building of suspense absent from so many horror films today. Director/Screenwriter Mark W. Curran has crafted an effective crime-suspense thriller which harkens back to a more Hitchcockian era, with subtle psychological undercurrents and a gripping crime drama unfolding in the fray. Think ‘Psycho’ Meets ‘Urban Legend.’

The story revolves around 26-year-old Ariana Chandler [Madison Spear] a troubled young woman with a difficult past who is hell-bent on finding her missing child. She clashes with Lenny Briggs, [Brock Morse] a relentless detective who is convinced she is hiding something and won’t stop at anything until he gets to the truth. 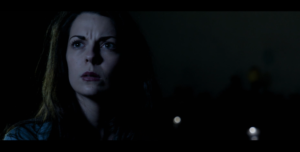 Matters are further complicated by suspect Frank Hackman, a local crackpot who lost his own daughter years before to what he believes is an urban legend known as Hoodman. As Briggs gets closer to the truth his own beliefs are called into question as the stakes for each character are raised higher.

At the heart of Hoodman lies an intriguing premise; that the things we believe can manifest into reality. The story plays with this premise in varying and interesting ways to pit the power of belief against the reality of truth.

While ultra-low budget, the filmmakers have done much with limited resources and wisely stayed within their means to deliver good quality production values using fewer locations and forgoing special effects.

Hoodman relies on suspense and dread rather than blood or violence to effect its scares, thus it may be too slow paced for some, while others will find its sense of foreboding and well-structured storytelling a welcome change from more visceral horror fare.

MOTHERLY – Coming Out on DVD May 3 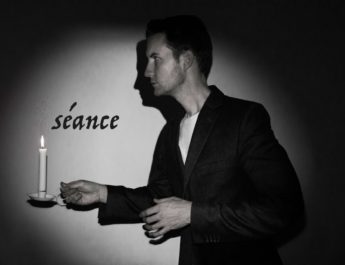