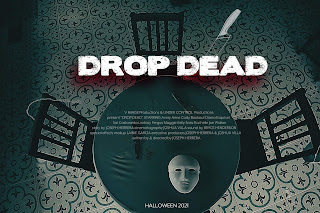 We recently got the chance to watch and enjoy the short horror film, “Drop Dead.” After watching the film, we thought we would continue to support the film by talking with its writer and director, Joseph Herrera. Below, please find our conversation about where the idea for the film came from, the big secret of the film, the ending, and more…

-PH: Where did the idea for the film come from? Was there any specific inspiration for it?

-Joseph: I worked on a short film about a pyramid scheme where the top people killed clients and sold their organs on the black market. I wanted to make my own spin on this and write a film involving all women in a home selling organs to make ends meet.

-PH: Was this idea always meant for a short film, or did you have plans for a feature as well?

-Joseph: We plan to film the feature this January. The short was just a little taste of the characters.

-PH: Please tell us a little about the story.

-Joseph: Drop Dead is about two escaped convicts seeking shelter as a ploy to rob a group of seemingly vulnerable women. Little do the men know these women are anything but vulnerable.

-PH: The women in the home have a secret to hide. Was it difficult to slowly craft getting to the final reveal of that secret?

-Joseph: I had a lot of fun writing these characters. I left a lot of unanswered questions involving the women on purpose to explore further down the line.

-PH: Speaking of the reveal, was that the ending you originally planned or did that ever change through the process?

-Joseph: The original ending actually had Lucky making it to his vehicle and the house mom was hiding in his back seat and stabs him with a syringe. Then the girls appeared like they did at the end of the final result.

-PH: What were some of the biggest challenges in making the film?

-Joseph: The biggest challenge was timing. We only had one and a half days to film twenty pages. We also did not know what the house would look like in person, so we were on the go constantly but we all had a blast.

-PH: How did this cast come together? What was it like working with them?

-Joseph: I had a blast working with every single one of my cast members. I did not hold auditions; opting to just ask close friends of mine to make a movie with me.

-PH: Did you enjoy being both the writer and the director for the film? Would you do both roles again, or do you have a preference for just one of those roles in your future projects?

-Joseph: I enjoyed every minute of it and would definitely do it again. I love writing and I am not one who likes to have the writer on set as I feel like the director has the say to change things from a different eye. But since this was a low budget film we couldn’t afford a director, so I stepped in to direct.

-PH: Here’s your chance to promote anything we haven’t talked about. Let us know something more about the film, where to find it, where people can find you, future projects, or anything else you would like to mention.

-Joseph: You can find me on Instagram j0sephherrera (with the number 0 not letter o). I just finished directing a film starring Leon, I am about to act alongside Dee Wallace, and currently am in the middle of filming a supernatural movie that I wrote, entitled “Dr. Kim Hunter and the Apparition”. The latter will be distributed by ITN Studios.

We would like to thank Joseph for taking the time to answer our questions. Hopefully this was a good introduction to his short. Again, if haven’t seen it, please check it out at https://www.youtube.com/watch?v=v-b9svXYFuU, and be on the lookout for his future projects.

Full Moon Comix’s FIRST ever release is READY TO LAUNCH!